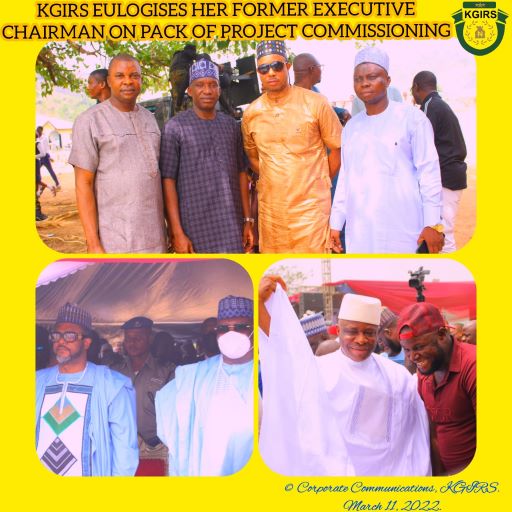 The Acting Executive Chairman, Kogi State Internal Revenue Service, and his Management Team felicitate with the Distinguished Senator Yakubu Oseni, who is also the former Executive Chairman of the Service, on the official commissioning of his constituency projects across Kogi Central Senatorial District.

The Acting Executive Chairman, Alhaji Sule Salihu Enehe, ably represented by his Management Team led by the Director of MDAs and Other Revenue, Mr. Olubunmi Ajayi, graced the official commissioning of projects in Agassa, Okene, Kogi State, on Thursday, 10th of March, 2022.

Salihu Enehe described his former Executive and Boss, the Distinguished Senator Yakubu Oseni, as an individual with loftiest ideas whom he, Salihu, has no doubt for his quality representation at the Red Chamber while eulogising him as a valuable assets to the nation in general.

Salihu Enehe further commended his Excellency, the Executive Governor of Kogi State, Alhaji Yahya Bello, who was represented at the event by His Excellency, Chief Edward David Onoja, the Deputy Governor of Kogi State, for the choice of the Distinguished Senator Yakubu Oseni, and his full support for him in realising and translating his dream to serve the people of Kogi Central Senatorial District at the upper chamber.

According to Salihu Enehe, the 600 well-equipped JAMB Computer Based Test (CBT) Centre which is named “GYB CBT CENTRE” will no doubt address the problems faced by the teeming youths from Kogi Central who seek admission to schools for higher learning.

The Acting Executive Chairman appreciated his former Revenue Boss stating that his immediate constituency “THE KOGI REVENUE HOUSE” is delighted for his achievement as it is first of its kind. He equally prayed that the Almighty God continues to preserve and watch over his health and provide him with assured safety in all his indulgence.

The high point of the event was the unveiling of the “GYB CBT CENTRE” by the Senate President of the Federal Republic of Nigeria, Distinguished Senator Ahmed Lawan.