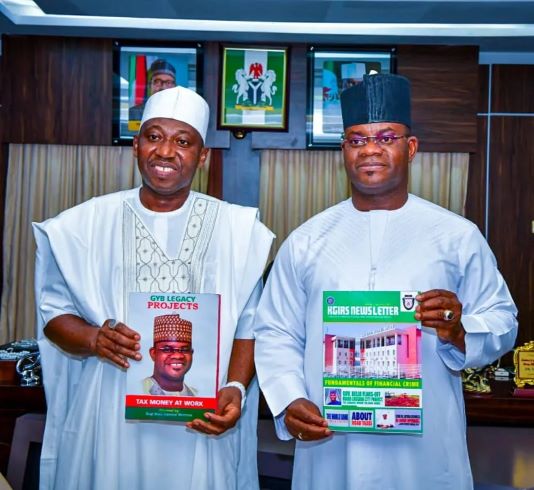 Kogi State Governor, His Excellency, Alhaji Yahaya Bello, has lauded the efforts and dexterity of the Management of Kogi State Internal Revenue Service (KGIRS) for the unveiling of the maiden edition of the Service’s Newsletter and a flyer containing a plethora of the legacy projects executed in the last six years of the Executive Governor in office.

The Governor who was extremely excited when he received copies of the Newsletter and flyers commended the Management and Staff of KGIRS for such feat and charged them to intensify efforts in sustaining and improving the revenue generation of the State.

He stated that the Newsletter will also enlighten the taxpayers on the utilisation of the tax collected by the State Government and the need for them to comply with carrying out the civic duty.

According to him, the quarterly newsletter will continue to project the activities of the Governor especially on the deployment of the tax collected to meet the citizens’ social needs which will consequently engender tax empathy in the State and cause a collaborative partnership between the government and the people of Kogi State.