3 DECADES ON THE THRONE: ACTING EXECUTIVE CHAIRMAN OF KGIRS FELICITATES WITH HIS ROYAL HIGHNESS, THE MAIGAIRI OF LOKOJA AND AN INVALUABLE TAX AMBASSADOR 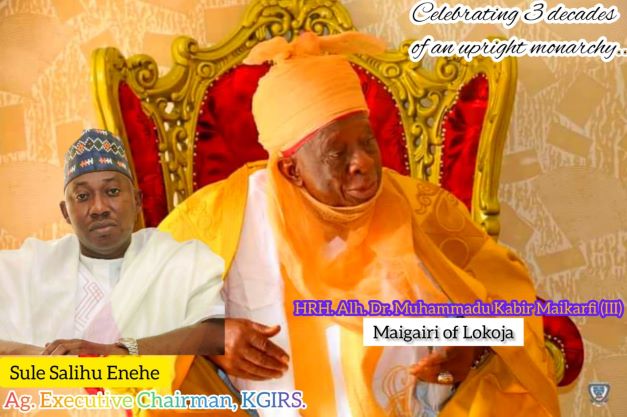 The Acting Executive Chairman, Kogi State Internal Revenue Service, Alhaji Salihu Sule Enehe, has felicitated with His Royal Highness, the Maigairi of Lokoja, and the Chairman, Lokoja Traditional Council, Alhaji (Dr) Muhammadu Kabir Maikarfi III, OON, on the auspicious occasion of his 30th year anniversary of his ascension to the exalted throne of his grandfather.

In a goodwill message contained in a statement disclosed today on 3rd of May, 2022, in Lokoja, by the Head, Corporate Communications Unit of the Service, Alhaji Muhammad Mukhtar Idris, ably represented by Mr. Mohammed Atojoko, the Acting Executive Chairman of Kogi State Internal Revenue Service said that His Royal Highness is a pillar of tax ambassadorship in the State, describing him as an epitome of wisdom, sincerity and uprightness.

Enehe further commended His Royal Highness for all inclusiveness in the Lokoja Traditional Council which has translated greater development in the Lokoja Emirate Council.

Salihu affirmed that His Royal Highness’ great support for taxation in the Lokoja Traditional Council has given the Service the strength and inspiration for its seamless operations in the confluence city.

According to the Acting Executive Chairman, His Royal Highness remains an invaluable proponent of taxation in the Lokoja polity given his total commitment, support and his fatherly roles which always interface between the Taxpayers and the Service as several meetings have been held in his palace to chart ways forward for the seamlessness of tax operations in his domain.

The Acting Executive Chairman, Alhaji Salihu Sule Enehe, on behalf of his Management and Staff of Kogi State Internal Revenue Service, heartily congratulates His Royal Highness and the entire emirate cabinet members on this historic day of his 30th year anniversary as the Maigairi of Lokoja.

The Acting Executive Chairman of the Service prayed that Allah continues to make his days long on the throne, and may his reign continue to bring sustainable peace to the State.